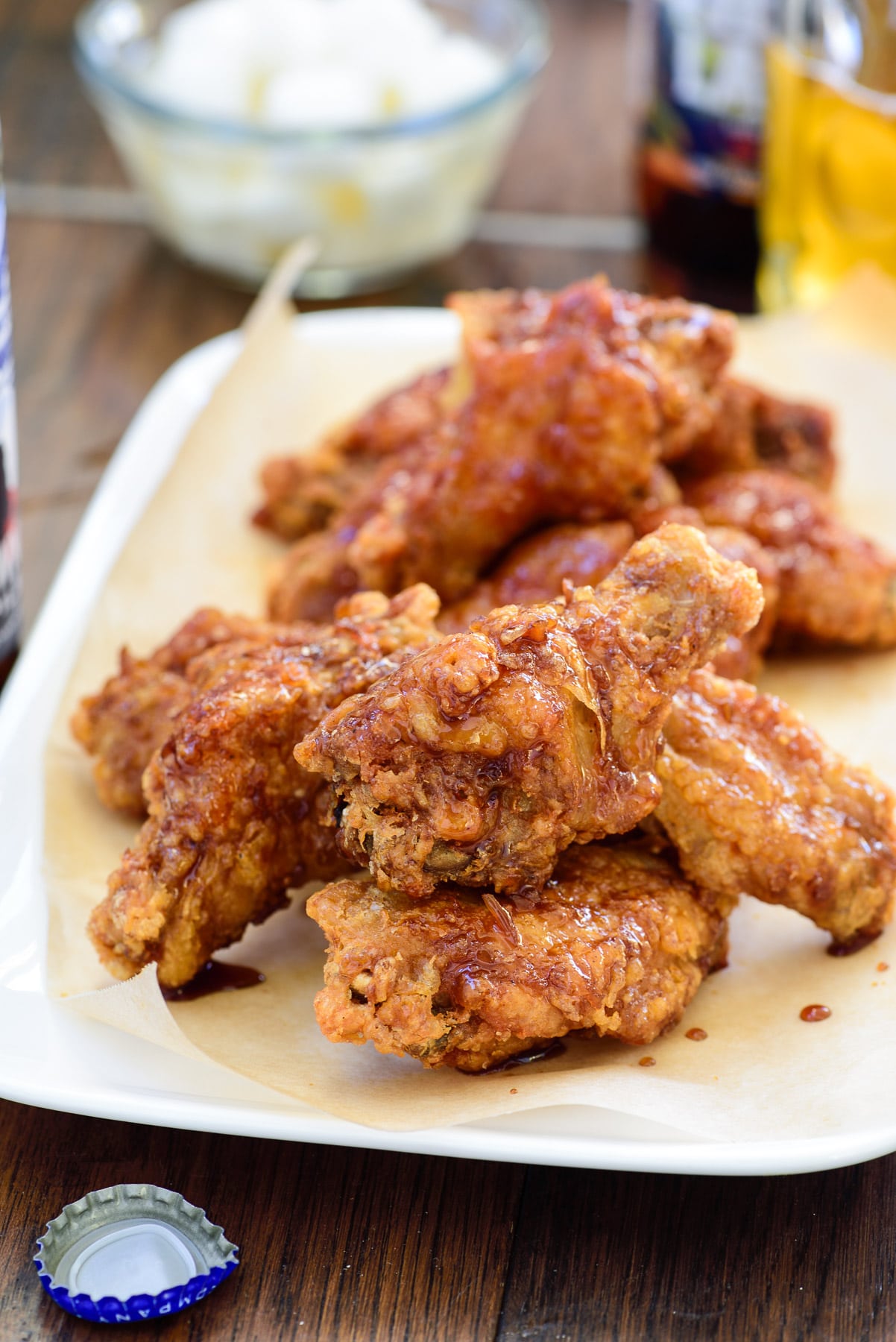 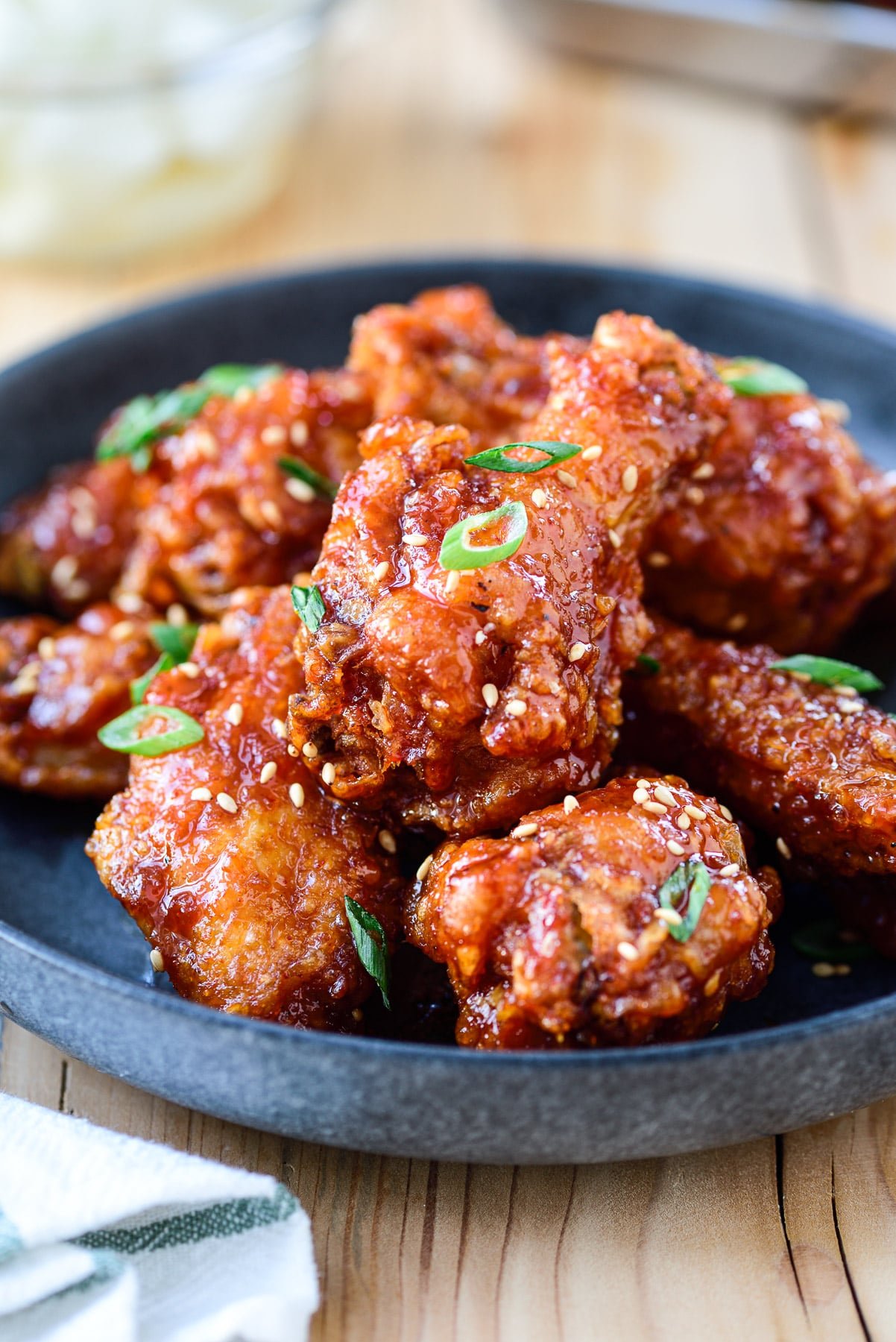 As I mentioned in my dakgangjeong recipe, another popular type, fried chicken is often enjoyed with beer, and that combination is called ChiMaek (치맥), chi from chicken (치킨) and maek from maekju (맥주, the Korean word for beer). It’s a relatively new term that reflects the casual dining and drinking culture. 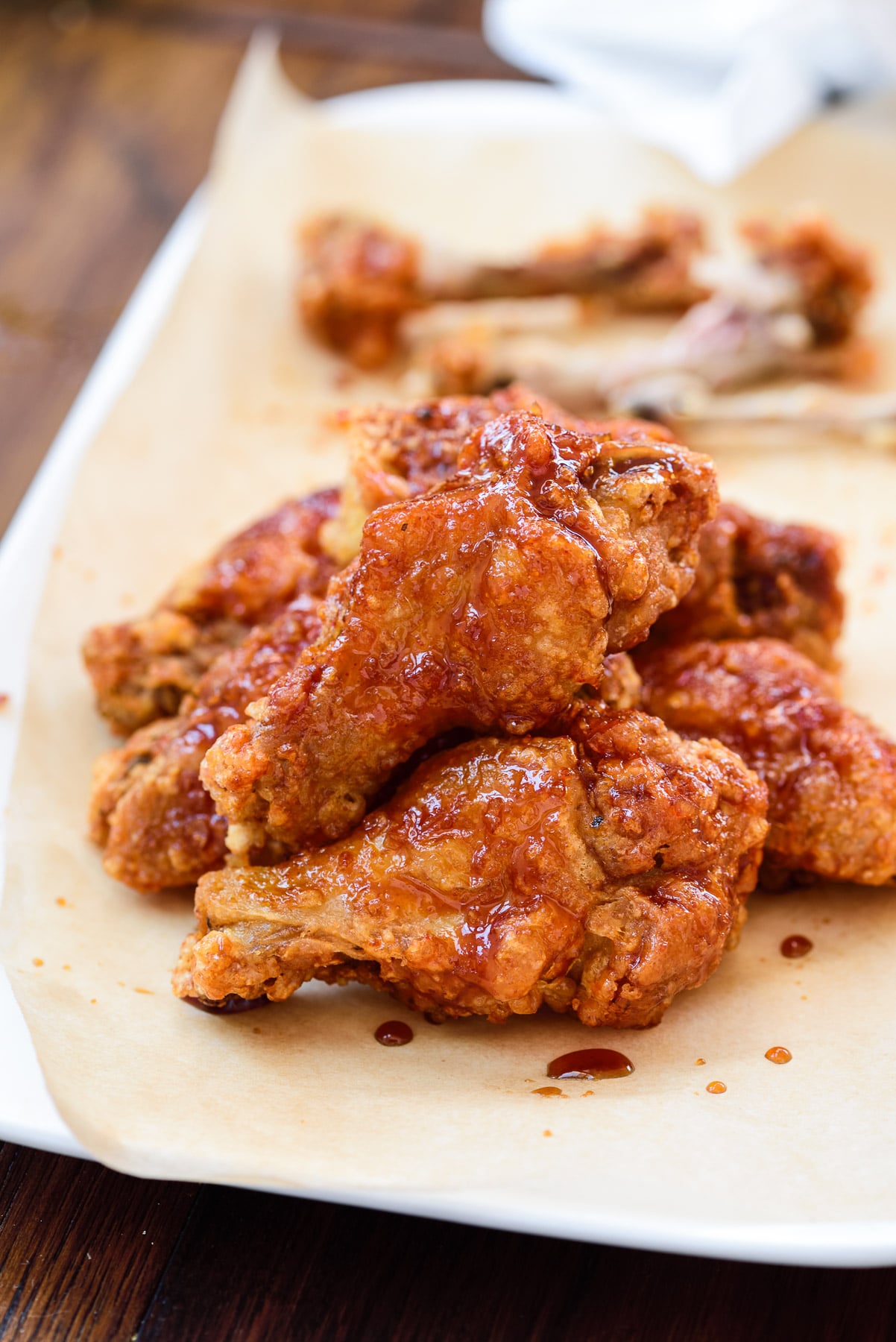 For this recipe, I used chicken wings, separated into drumettes and wingettes/flats, but any small cut(s) of chicken works. In Korea, it’s common to cut up a small sized whole chicken for frying.

It’s common in Korea to brine the chicken in a flavorful solution for a day or two. I simply season the chicken with a little bit of salt, pepper and ginger. For best results, let it sit for 2 hours or longer (overnight to 24 hours) in the fridge.

Dry or wet batter? In my old recipe, I simply used potato starch (or cornstarch). It’s a simple way to create a thin, crispy and crunchy crust. You can still do that if you like, using 1/2 cup cornstarch or potato starch and rubbing it well on to each chicken piece. It’s a gluten free option. I included this as Batter option 1 in the recipe card.

However, in Korea, fried chicken is more commonly made with wet batter. Some people simply use frying mix (aka tempura mix) to make wet batter, and there’s even frying mix specifically made for chicken. Some use a combination of frying mix and starch to add extra crunch. Frying mix usually is seasoned and contains baking powder, so you can create it with all-purpose flour if you don’t have frying mix. I’ll add a note in the recipe card as to how you can modify all-purpose flour for this recipe.

I’ve experimented with different ratios and settled with a 2 to 1 ratio of frying mix to starch, which is 1/2 cup frying mix and 1/4 cup potato starch (or cornstarch) for this recipe. 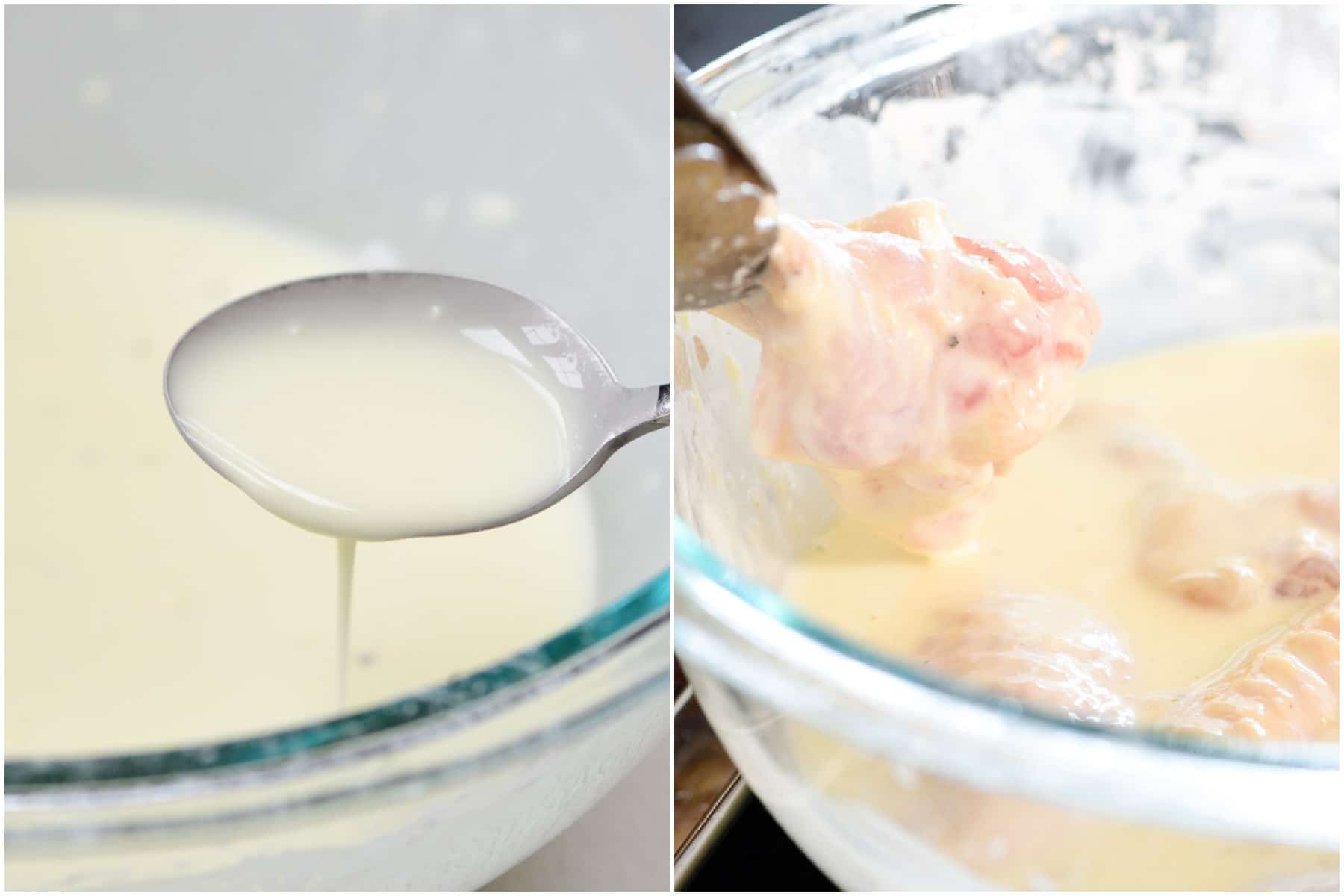 These dry ingredients mixed with the equal amount of water (3/4 cup) creates a delicately thin crust that’s deeper in color but lighter in texture than that of starch alone. You can use a little more water for a thinner crust. Likewise, use less water for a thicker crust. To create a thin crust, I don’t dredge the chicken in the dry mix before or after dipping in the wet batter.

The crust stands up very well to the sauce. Better yet, the chicken stays crunchy for several hours even after coated with the sauce. Also, since the crust is lightly seasoned from the frying mix, the fried chicken is delicious as is without the sauce. 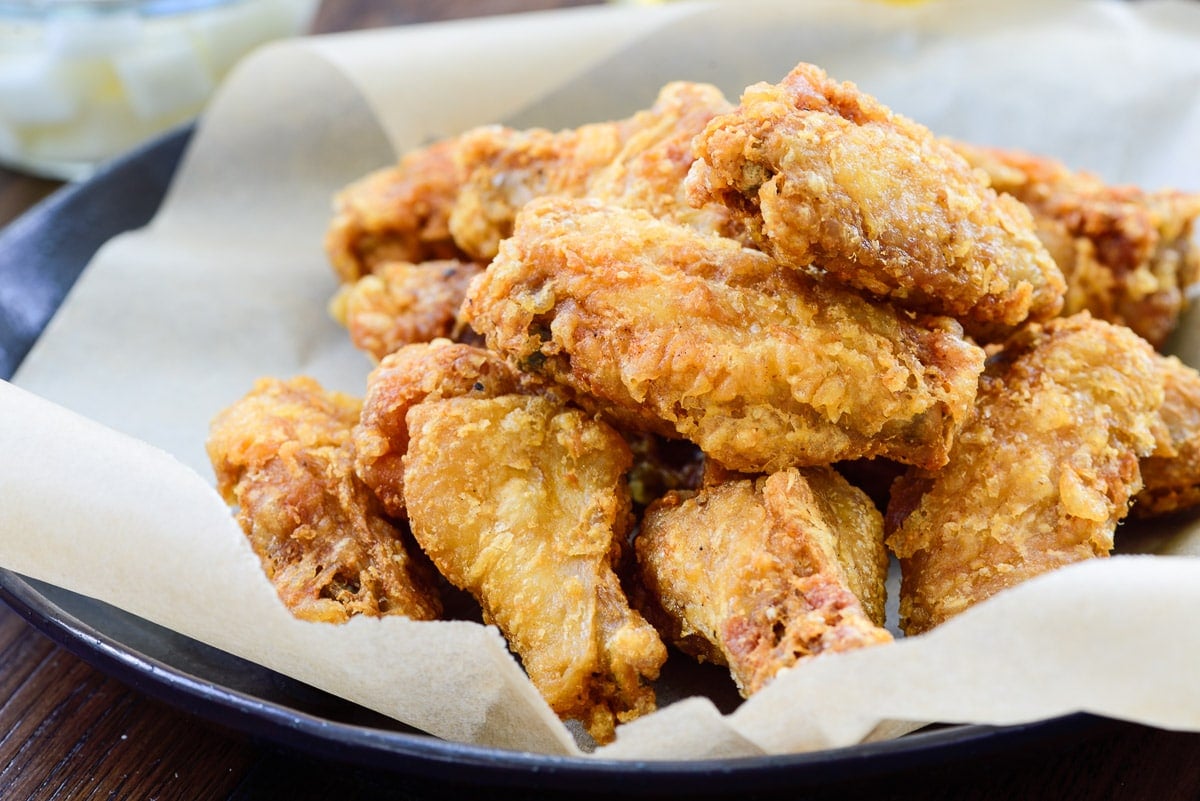 To deep-fry wings, the Korean technique usually calls for frying them at a relatively low temperature (320-330°F) and then fry them again at a higher temperature (350-360°F). Let the chicken cool down for a few minutes in between, so the remaining moisture escapes. The first frying can be done ahead of time. Fry the chicken in two batches for the first frying, but you can fry them all together for the second frying. 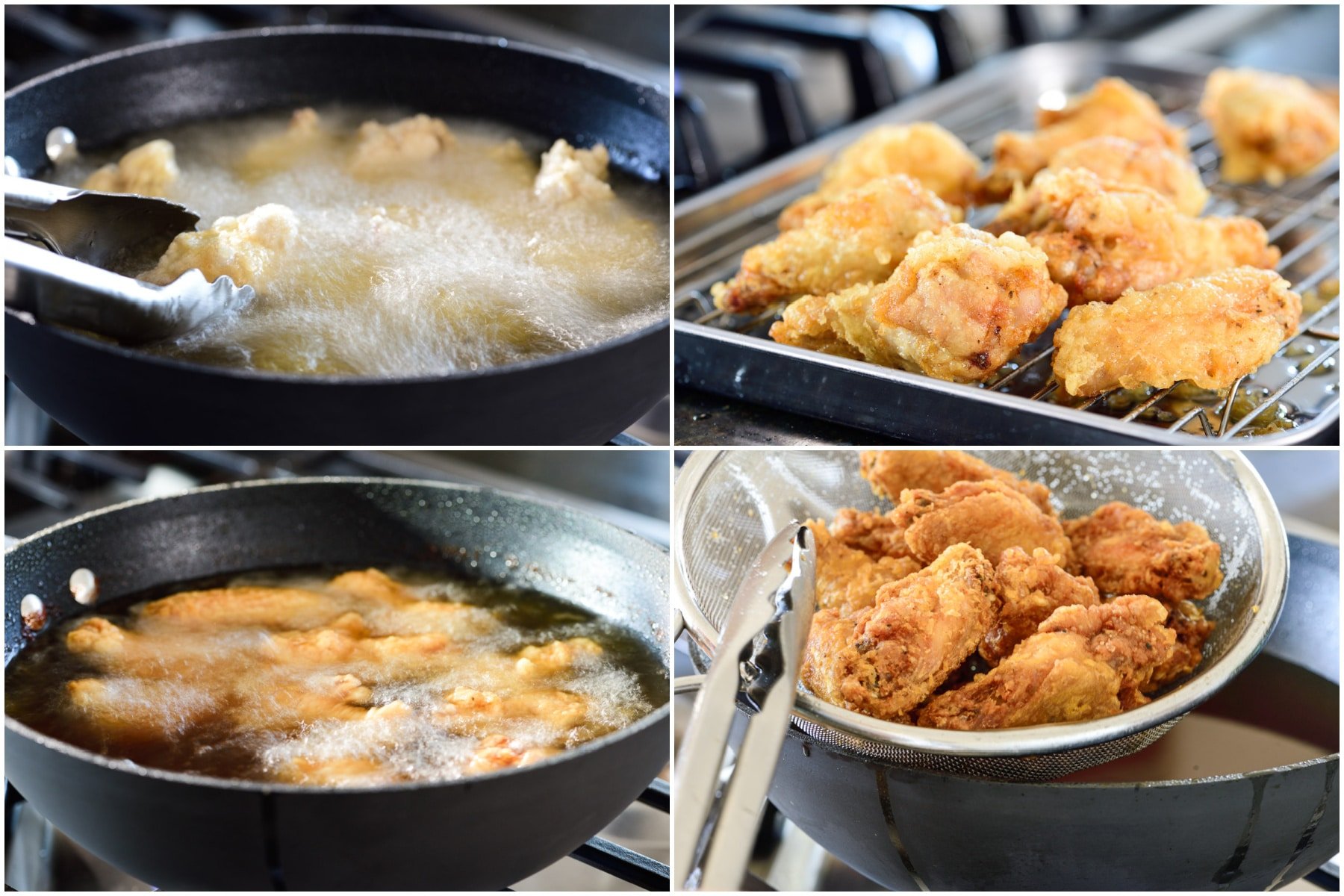 Korean fried chicken largely comes in two different types of sauces – mild soy garlic and red spicy, although they are called differently in some cases. You can choose one or make both to have ban/ban (half/half).

You can either toss the fried chicken pieces in the sauce or hand-brush them. The latter is what famous chicken places boast about doing in order to keep the crust crunchy longer. With the brushing method, you can also adjust the amount of the sauce on each piece to your liking.

This sweet and spicy red sauce is slightly thinner and lighter than my original yangnyeom chicken sauce if you tried it. It’s not too spicy, but you can always adjust to your taste. I use gochujang along with some hot sauce for its unique tangy flavor and heat. If you don’t want to add any extra heat, use ketchup instead of hot sauce. If you’re not using a hot sauce, add some vinegar (rice, white, or apple cider).

For the sweetness, I use a combination of honey and sugar. You can use corn syrup or oligo syrup instead. Garlic is a must, but some ginger is good too if you like. 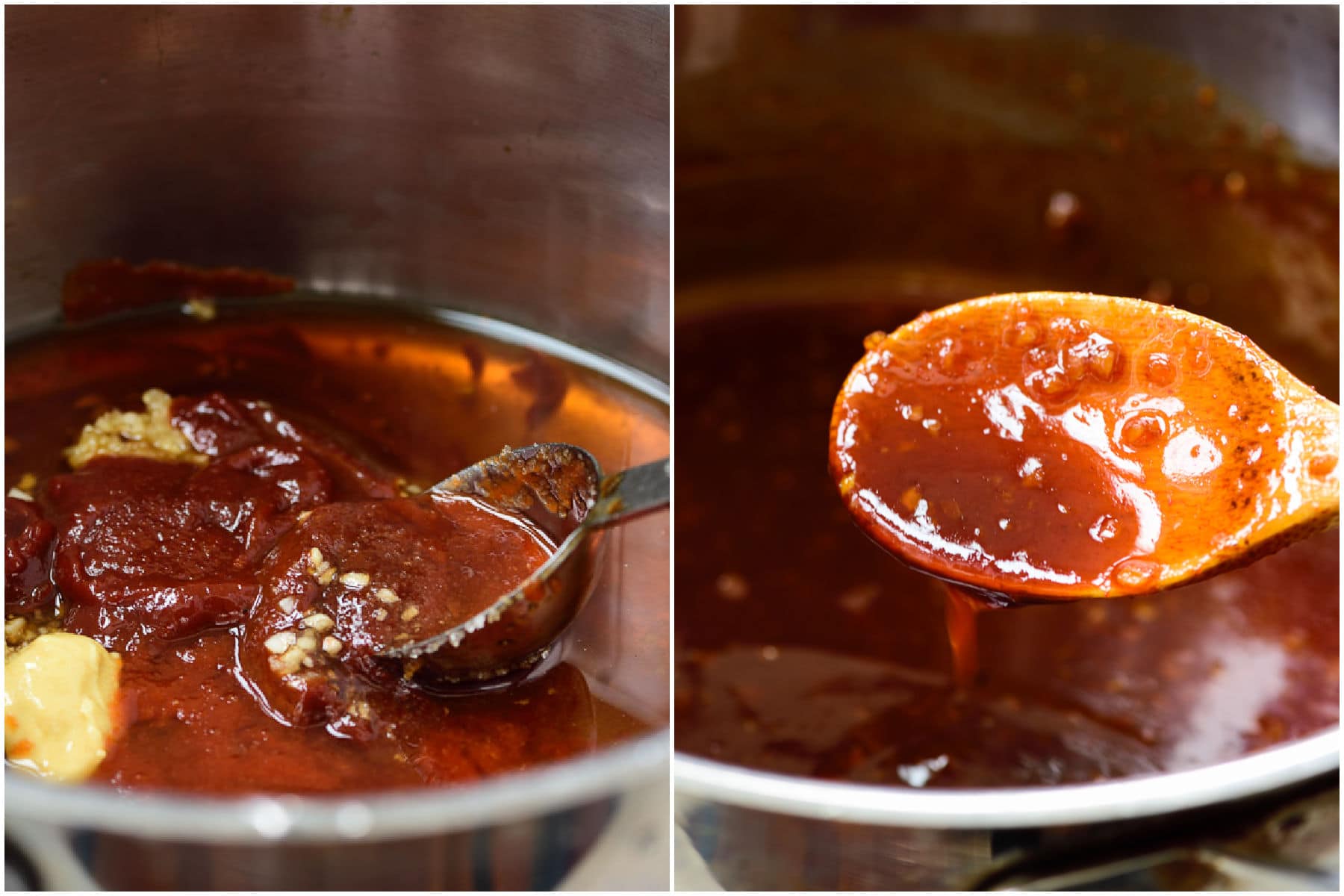 This soy sauce based sauce is great especially for those who are not a fan of spicy food. Soy sauce, honey and garlic are the prominent ingredients for this sauce that creates the crispy candid exterior when glazed on the chicken. 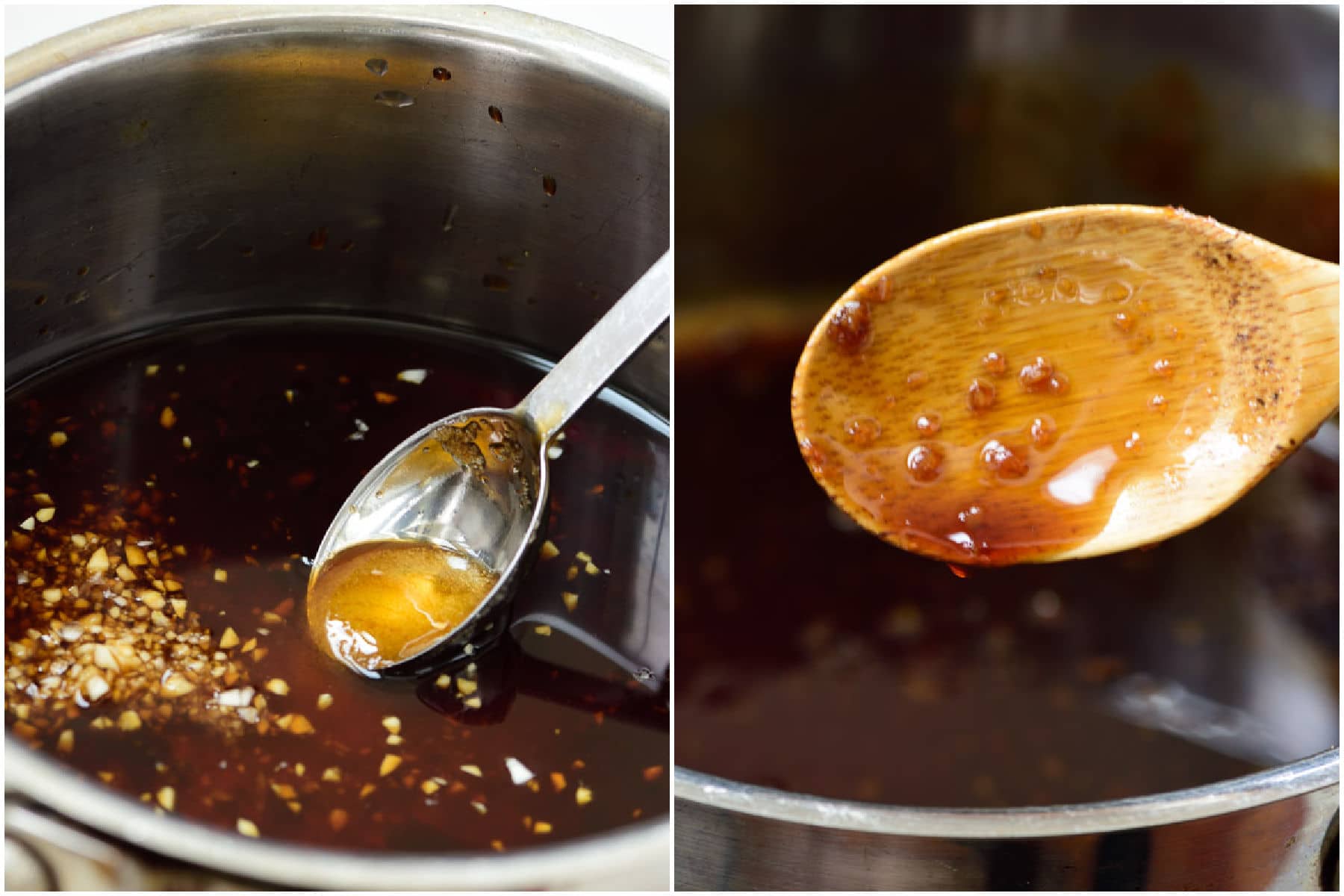 Watch how to make it 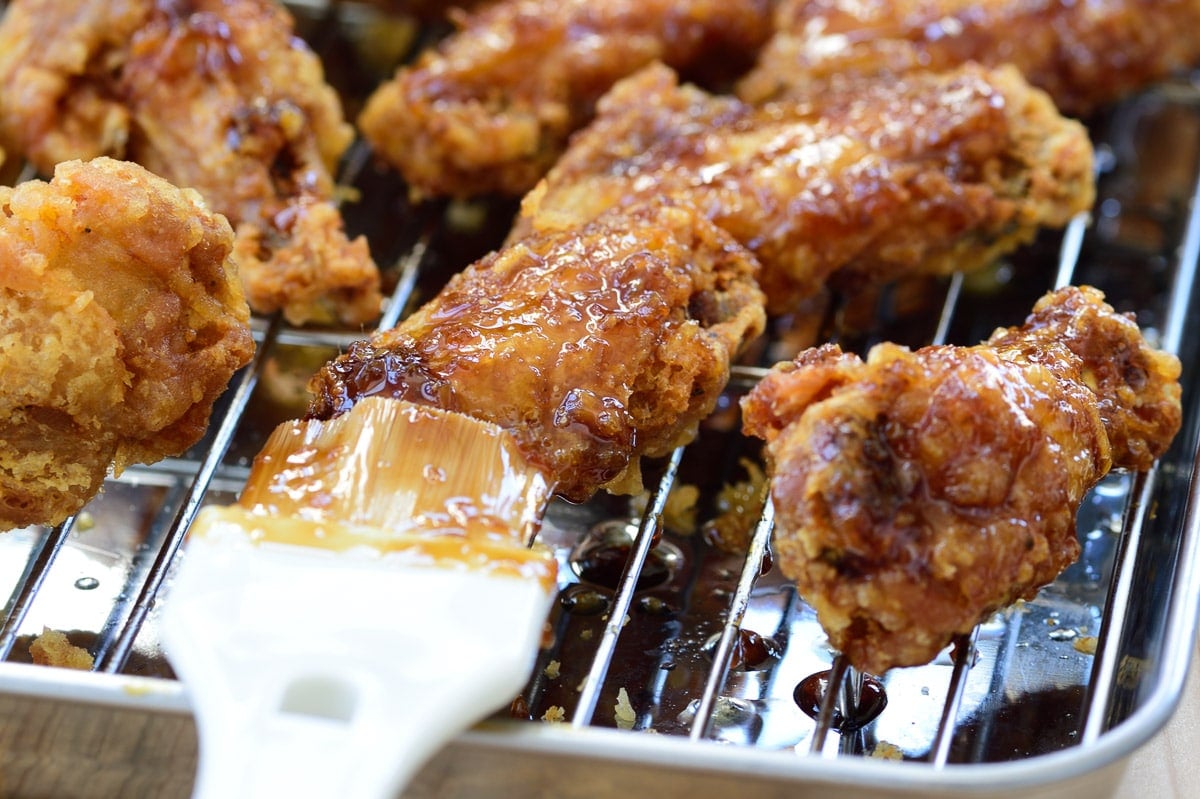 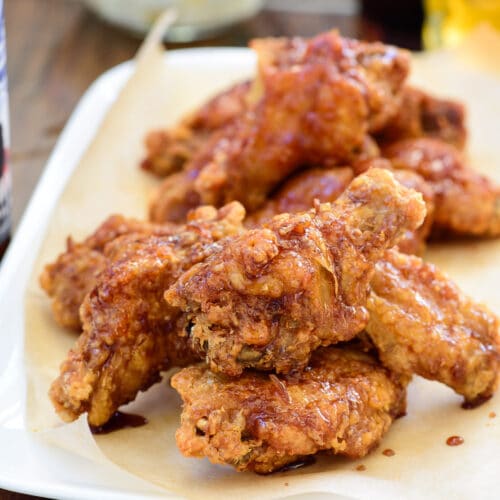 For the dry batter option

For the wet batter option

For the optional garnish:

For those of you who still want my old yangnyeom chicken sauce, which is a thicker sauce, here it is:

Add 1 tablespoon of cooking oil and then the onion, garlic, and ginger. Stir for a minute until fragrant. Add all other sauce ingredients, and stir well. Simmer until it thickens slightly, about 4 to 5 minutes. Turn the heat off. The sauce will get slightly thicker as it cools down.
If you want to make the red spicy sauce even more spicy, add 1/2 teaspoon (or to taste) of gochugaru (Korean red chili pepper flakes) or drop in a couple of small dried red chili peppers.

The original Yangnyeom Chicken recipe was posted in Feb 2015. I’ve make significant revisions to update the recipe with different batter and sauce options.