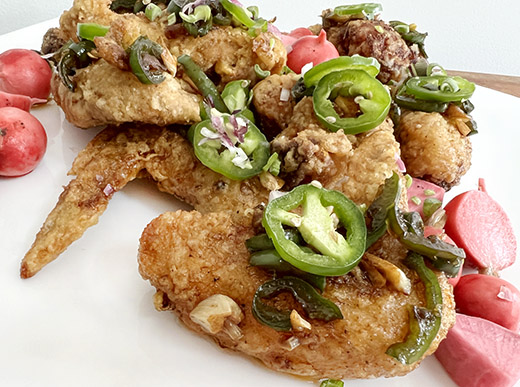 Food ties together so many parts of our lives. Eric Kim learned from working as a food writer that “we can never really run away from who we are.” He moved back home to Atlanta at the start of the pandemic to cook with his mother and work on the book Korean American and found a bit of his identity in the process. I recently received a review copy. Transcribing his mother’s recipes and transforming them into his own made clear his understanding of being an American who is also Korean. The recipes are specific dishes fondly remembered from his upbringing with some of his own takes. There are Korean flavors with American ingredients and vice versa and a mix of the two. It’s a personal look at life through food and how his family prepared these dishes with lots of endearing stories throughout. A great example of how Korean and American concepts collide is the Gochugaru Shrimp and Roasted Seaweed Grits. The creamy, buttered grits are flavored with crushed gim, which is roasted seaweed, and sesame oil while the shrimp are bathed in lots of garlic, gochugaru, fish sauce, and lemon juice. The richness of the butter brings all these flavors together magically. I also tried the Roasted Seaweek Sour Cream Dip that I made with skyr from a local producer, and I have the page marked for Crispy Yangnyeom Chickpeas with Caramelized Honey. Of course, there are multiple variations of kimchi and recipes that incorporate kimchi like the cold noodle dish Kimchi Bibimguksu with Grape Tomatoes, Caramelized-Kimchi Baked Potatoes, and Kimchi Sandwiches on Milk Bread. There are some recipes I look forward to making my own. I’d love to try some meatless fillings for Kimbap, but two options are included with Spam and Perilla and Cheeseburger. And, I want to try Sheet-Pam Bibimbap with all sorts of vegetables. There are fish, chicken, and beef dishes; stews; vegetable recipes honoring Kim’s mother’s garden; and a chapter of Feasts. The chapters are rounded out with one for sweets that includes a Dalgona Butterscotch Sauce for ice cream that I have to try. It was the Soy Sauce Fried Chicken, though, that I turned to next.

This recipe is from Kim’s Aunt Georgia, and it’s the crispiest chicken ever. The pieces are coated in potato starch and fried twice before being tossed in a spicy, soy sauce glaze. I’ve fried things all sorts of ways such as in a simple flour coating, in a three-step breaded coating, in nut crusts, etc. But, this was my introduction to using potato starch. It really does make an incredibly crunchy exterior. I used thighs, legs, and lots of wings from Shirttail Creek Farm. The sauce was a mix of oil, sliced garlic, sliced jalapenos, brown sugar, and soy sauce. It was warmed until bubbling in a skillet, and the twice-fried chicken was turned in it before plating. An important accompaniment is the Chicken Radishes. They are simply pickled radishes in distilled vinegar that go perfectly with the rich, fried chicken, and I luckily had some local radishes to use the day I made them. 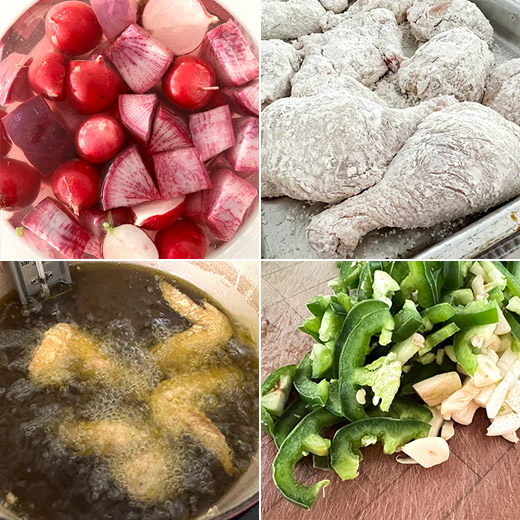 Bright, acidic radishes with the crunchiest, spicy chicken was a fantastic combination. I highly recommend the duo. It can’t be easy for immigrants like Kim’s parents to navigate unfamiliar ingredients in attempting to make the kind of food they know and love. But, this book shows the evolution of just that and how new dishes came to be. We’re lucky to get to share in their inventiveness.

My Aunt Georgia’s fried chicken is unmatched. I love how simple her recipe is, and within its simplicity—the careful combination of garlic, jalapeños, brown sugar, and soy sauce—lies great complexity. Her chicken stays crunchy for hours, thanks to the potato starch coating and the double fry, not to mention the savory, spicy glaze that candies the outsides. For balance, be sure to have this with the Somaek and the Chicken Radishes.

2. Pour 2 inches oil (enough to cover the chicken pieces while frying) into a large Dutch oven. Heat over medium-high heat to 350°F.

3. Line a plate with paper towels. Working in batches of a few pieces at a time, add the chicken to the hot oil and fry until lightly golden, about 4 minutes per batch. Transfer the fried chicken to the paper towels. Then, fry these same pieces a second time until golden brown, about 8 minutes per batch. Set these twice-fried chicken pieces aside on a wire rack until you’ve double-fried all of the chicken.

4. In a medium skillet, combine ½ cup vegetable oil, the garlic, 2 of the jalapeños, the brown sugar, and soy sauce and set over medium-high heat until it bubbles up. Add a few pieces of the fried chicken to the sauce and use tongs to quickly turn them over in the glaze just until coated. Remove and transfer to a serving platter. Repeat with the remaining chicken.

5. Garnish the fried chicken with the remaining jalapeño slices and serve immediately or at room temperature, when the soy sauce glaze on the outside will be at its crunchiest. 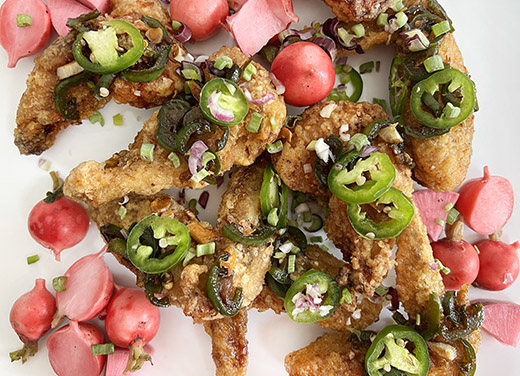