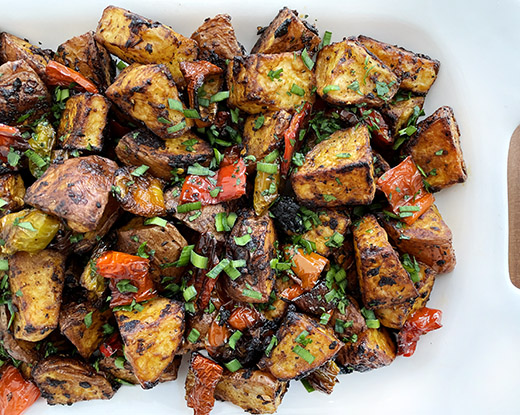 I do enjoy reading a cookbook in which the author writes candidly about how she really prepares various dishes. That was the case with Cook, Eat, Repeat: Ingredients, Recipes, and Stories by Nigella Lawson of which I received a review copy. In this book, the chapters are divided not by breakfast, lunch, and dinner or by season or by category of food. Instead, the chapters are themes introduced by a written explanation that includes how Lawson approaches ingredients, how she cooks for herself versus for guests, and how she uses leftovers for instance. The themes may seem random, but the writing offers more information than recipes on their own ever could. And, each recipe includes more than a headnote. Before the ingredient list and instructions, there is a page or two of writing about how the dish came about, how it can be modified at different times of year or for different occasions, and sometimes meandering thoughts on similar dishes. Meandering isn’t a criticism here. I quite enjoyed the foray through variations and executions. The first chapter is A for Anchovy, and I was delighted by the description of ways to enjoy anchovies on bread. She carefully explains the quantity and temperature of butter for an ideal base for anchovies on bread before describing a version of this she had in Milan that came with roasted red pepper slices. Then, she goes on to discuss crostini with mozzarella, burrata, or stracciatella that’s topped with an anchovy fillet. By the end of this intro to the chapter and before even reading through the recipes, I was doing a search to order anchovies. In the chapter Pleasures, she wholeheartedly supports the seeking of pleasure in food and suggests guilty pleasures have no place in the world of eating since there should be no guilt in culinary joy. The recipes here include a Crab Mac ‘N’ Cheese, a Fried Chicken Sandwich, and Creme Caramel for One that I want to try. The book was finished during the pandemic, so the chapter Much Depends on Dinner took on a new meaning since dinner parties have become tricky or unadvisable depending on the current state of things. Here, you’ll find chicken dishes, lasagna, and roasted vegetables. I was inspired to try the Beet and Chickpea Dip recipe in this chapter. In its intro, there’s a discussion of dips to offer rather than complicated appetizers that includes an aside about a green salsa made with cilantro and jalapeno and the Burnt Onion and Eggplant dip included earlier in the book. This inspired me to whip up a chips and dip Friday with eggplant dip and roasted salsa. And, from later in that chapter, I had to try the Vegan Lemon Polenta Cake that I topped with a blueberry sauce. The dish I want to tell you more about, though, is the Roasted Potatoes with Apricot Harissa. The harissa appears a couple of times in the book. It’s used on a sheet pan chicken dish with sweet potatoes and again with roasted cauliflower and spinach. In the intro to the cauliflower recipe, there’s a mention of using the harissa on roasted potatoes with specific instructions for how to do that, and that’s what I did.

I had local potatoes and sweet peppers from Boggy Creek Farm, so the time was right for this dish. Both were chopped into big chunks. The potatoes were coated with olive oil and some of the harissa before being spread on a baking sheet. A few tablespoons of water were added before the pan went into a hot oven. After 20 minutes or so, I added the pepper chunks and stirred the mixture around to distribute the harissa and oil. The mixture roasted another 20 minutes or so until the potatoes were crisp outside, tender inside, and the peppers were browned. For the harissa, I used the dried peppers I had on hand which on that day were pasillas and anchos. They were stemmed and seeded and rehydrated in boiling water. Coriander, cumin, and cardamom seeds were toasted. The softened chiles, spices, some garlic, dried apricots, turmeric, smoked paprika, olive oil, apple cider vinegar, and salt were all added to a food processor and pureed. I omitted the ginger that was part of the ingredient list. 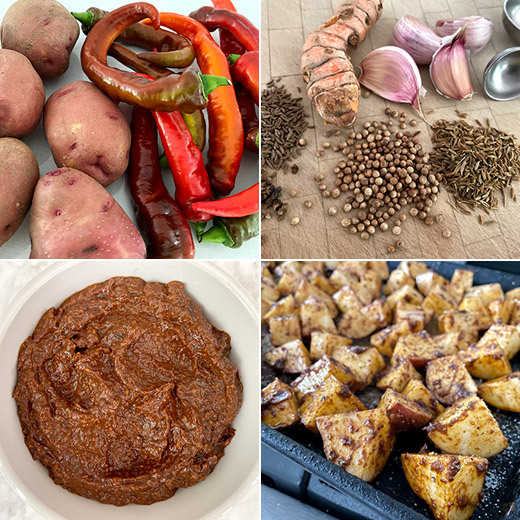 Happily, this made enough harissa for a few uses, and I have a jar in the freezer. The sweetness of the apricots plays nicely off the bitterness of the dried chiles. It was fantastic with the roasted potatoes and peppers, and I can’t wait to try it with cauliflower and/or chicken. Or, I might meander a bit myself and try it on fish or with roasted mushrooms. That might not happen until after I’ve tried all those options for anchovies on bread though. 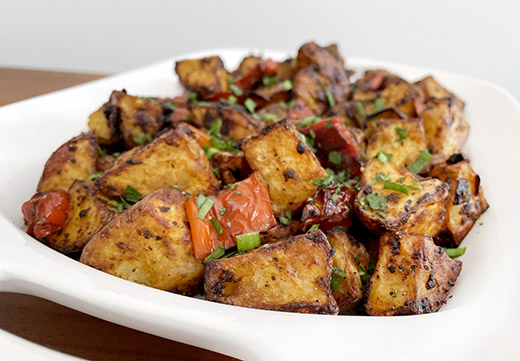