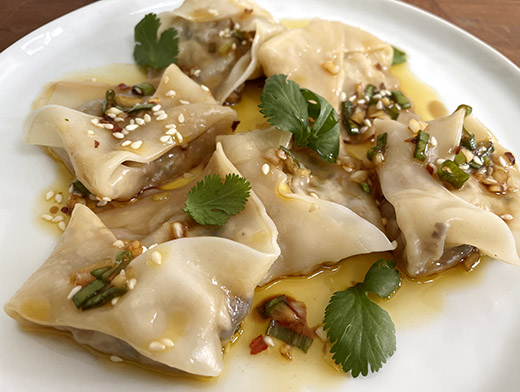 Well, it’s been awhile. I guess I took an accidental break from blogging. My only excuse is that I’ve been outside. After our freakish February winter storm, our yard that used to be mostly cacti, agaves, yucca, and fan palms was instead mostly dead and brown. We’ve been busy cutting off brown leaves on things that might bounce back, removing things that are definitely dead, and slowly adding in new plants. Also, I started riding a bike outside again for the first time in many years. I’d gotten used to sitting on bikes for spin classes that don’t go anywhere, and going somewhere on a bike is a lot of fun. But, I do want to tell you all about a book that I read and cooked from recently. I received a review copy of My Shanghai: Recipes and Stories from a City on the Water by Betty Liu. She wrote this as a record of her family’s home cooking traditions that began with her parents in Shaghai and were later adapted to their lives in Oregon. She writes: “Food is deeply entwined with pride, respect, and welcome in Chinese culture. It’s a method for treating the body, but also for showing love and generosity.” The hope is that the reader will build new traditions from these recipes. The book is organized by season and also includes chapters for Street Food and Core Recipes. Memories are shared throughout of sharing food and cooking both in the US and in China. I especially enjoyed reading about the breakfast noodles that the author’s father made for her on test days when she was growing up and the importance of noodle soup to Suzhou cuisine. I was taken with several noodle recipes in the book and got completely distracted by the scallion recipes. There’s Scallion Oil Noodles, Scallion-Roasted Fish, Scallion Oil-Poached Chicken, and Scallion-Ginger Clams. Now that eggplant is abundant for summer, I’ll be trying the Seasoned Steamed Eggplant. And, I have to make the Tomato and Egg Stir-Fry and use it as a topping on the Sauced Noodles. I also have several pages marked in the Street Food chapter such as the Scallion Flower Buns made with twisted strips of dough, the Shaghai Shaomai with homemade wrappers, and Liu’s favorite version of Scallion Pancakes. First though, I set about making the Shanghai Big Wontons after reading that in warmer weather they are served at room temperature with chile oil rather than in a bowl of steaming broth.

Of course, I made the filling my own a bit by skipping the ground pork and using reconstituted and finely chopped dried shitakes instead. I had some locally-grow cabbage and green onions that I used as well. Cornstarch, soy sauce, white wine, white pepper, and sesame oil were added, and the finely chopped mixture was stirred until it formed a paste-like consistency. I used store-bought wonton wrappers here. The wontons were filled, folded, and sealed and then covered and refrigerated until cooking time approached. I also froze some on a baking sheet before transferring them to a bag for storage for a later date. I also made the chile oil from the book that involves simmering oil with ginger, scallions, star anise, a cinnamon stick, bay leaves, fennel seeds, and dried chiles. After simmering, that oil was strained into a bowl containing crushed red chiles, white sesame seeds, and garlic. For the sauce, some of that chile oil was mixed with soy sauce, black vinegar, garlic, and scallion. After cooking the wontons in boiling water, they were transferred to serving bowls, and topped with the chile oil sauce and cilantro. 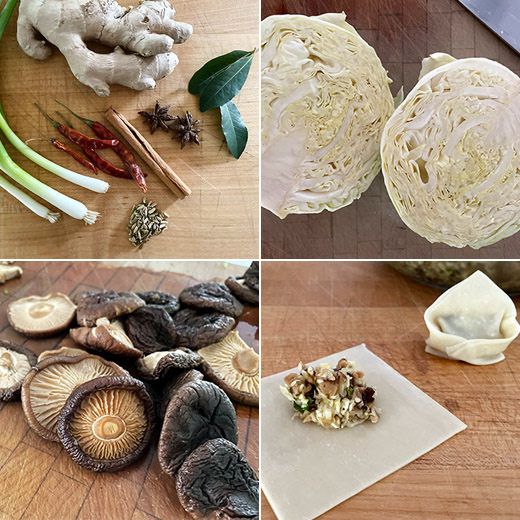 I’m not sure which leftover item was more exciting to have on hand, the chile oil or the frozen wontons. Both were happily used in short order. There’s so much to learn from this book. Whether it leads you on an ingredient search or inspires you to make some adaptations, there will be delicious meals as a result. 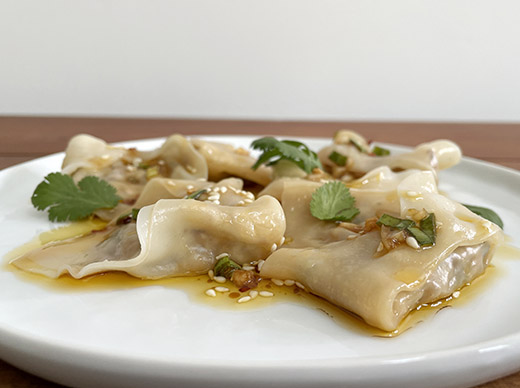