It makes me so happy when I can recreate a restaurant dish at home. Take these sandwiches. A local restaurant had them as a special this fall and we loved them. I think we had them four or five times, which is a lot for us. Then they switched to a winter special and we’ve been missing them ever since. Then one day I realized I could just make them at home. 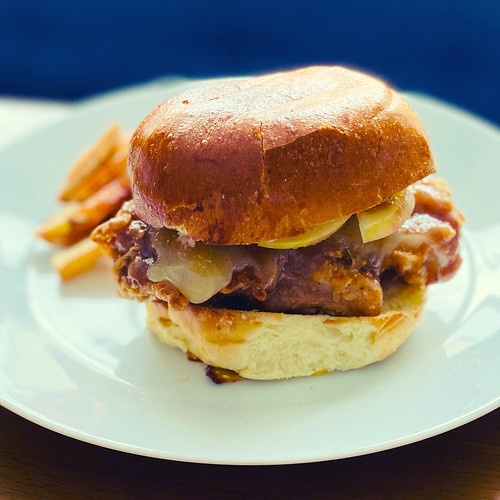 The hardest part was the chicken. We’re able to get the same buns they use at the restaurant at a local market, so that part was easy. Cheddar and honey crisp apple slices were also not a problem. I took a chance on the cinnamon-infused maple syrup being as easy as sprinkling some cinnamon in maple syrup and reducing it. That left the chicken.

Then, like a sign from above, I was scrolling through social media and saw a Cook’s Country spot on GMA about none other than fried chicken! I watched the video, found the recipe and I’m thrilled to say it was spot on.

4 brioche rolls, cut in half and toasted

Pat chicken dry with paper
towels. Using meat pounder, gently pound each chicken piece to even 1/2-inch
thickness. Season both side of the chicken with
the remaining spice mixture.

Whisk flour, baking powder,
and reserved 1 tablespoon spice mixture together in large bowl. Add 3 tablespoons
water to the mixture and rub together with your fingers until water is evenly
incorporated and shaggy pieces form. Beat egg whites in shallow dish.

Set wire rack in rimmed
baking sheet. Working with 1 piece at a time, dip chicken in egg whites to
thoroughly coat, letting excess drip back into dish, then dredge in the
flour mixture, pressing to adhere.

Transfer chicken to prepared
wire rack and refrigerate for at least 30 minutes or up to 1 hour. Add maple syrup and cinnamon to a small
non-stick saucepan. Bring to a boil and stir frequently until thickened.
Keep over low heat until ready to serve.

Add oil to large Dutch oven
until it measures about 1 1/2 inches deep and heat over medium-high heat to 375
degrees. Add chicken to hot oil. Adjust burner, if necessary, to maintain oil
temperature between 325 and 350 degrees. Fry, stirring gently to prevent pieces
from sticking together, until chicken is golden brown and registers 160
degrees, 4 to 5 minutes, flipping halfway through frying.

While the chicken is frying, combine the maple syrup and cinnamon in a small pot. Bring to a boil and let thicken. Keep an eye on it so it doesn’t burn. You want to keep it hot or the sugar in the syrup with solidify, so keep it over low heat until you’re ready to use it.

Transfer chicken pieces to clean
wire rack, top with some cheddar slices, and let sit until the cheese melts.

Spread some mayo on the top half of each bun. Add some of the maple syrup to the bun. Place one chicken breast on the bottom bun, then top with two slices of apple. Serve.