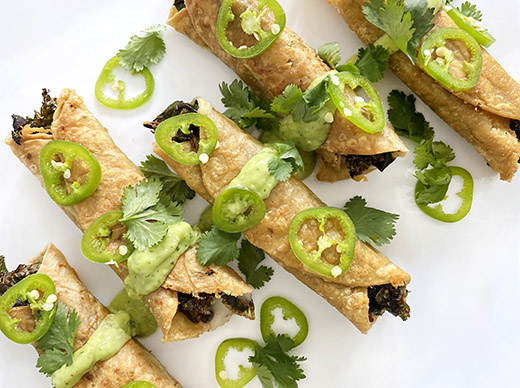 As soon as I opened my review copy of Chicano Eats: Recipes from My Mexican-American Kitchen

by Esteban Castillo, I knew I was going to have fun cooking from this book. This is a collection of Mexican food and flavors transformed by time and place. Castillo has been inspired by the cooking of his mother while growing up in California and by his grandparents whom he visited as often as he could in Colima, Mexico. And now, he puts his own stamp on family favorite recipes and creates new takes of his own. First, the book has a joyful feel to it from the layout and use of color to the many, richly saturated photos. The recipes start with basics like salsas, beans, rice, and sauces and move on to everything from appetizers to desserts and drinks. There are so many things I want to try; this book will be at my side in the kitchen for the foreseeable future. I fell for the book when I flipped it open to the page with a torta filled with delicata squash seasoned with a spice mix based on chorizo flavors. A few pages later, there’s a Rigatoni with Cilantro Pesto and Sauteed Oyster Mushrooms and then the Shrimp Ceviche Tostadas. Of course, I was hooked. There are a few versions of pozole, lots of options for tacos, and delicious drinks with and without alcohol. In the head note for the BBQ sauces, there’s a mention of grilling quail which I think would be fantastic with the Hibiscus BBQ Sauce. That sauce is also used to marinate the Tequila BBQ Chicken Skewers. I’ll have to try both. I also predict I’ll be trying several options in the Drinks chapter. I’ve never made homemade horchata, but I want to try it. There are three versions here: classic, matcha, and coconut, and all can easily be made dairy-free. And, the aguas frescas all look incredibly refreshing especially the Cherry Lime Chia Agua Fresca and the Strawberry-Jamaica Agua Fresca. The Desserts chapter reminded me that I’ve been meaning try a chocoflan for ages. It’s a layered dessert that’s made with chocolate cake batter topped with flan custard. As it bakes, the layers switch places, and the flan moves to the bottom of the pan. It sounds like magic, and I want to see it happen. To get started cooking, the Flautas de Rajas con Queso looked like a surefire hit, and I had a craving for the accompanying Salsa de Aguacate.

I don’t know why I had never made avocado salsa before. It’s a perfect mix of guacamole and salsa verde. The day I made it, I declared it was my favorite thing I’d made lately. I keep making it now so it’s always in supply in my refrigerator. It’s a simple puree of avocados, garlic, green onion, tomatillo, cilantro leaves, serrano, lime juice, and salt. It couldn’t be easier. For the flautas, I had some locally-grown poblanos on hand, and they were seeded, sliced, and cooked with chopped crimini mushrooms, and minced onion. Garlic was added, and the mixture was seasoned with salt, pepper, ground coriander, and ground cumin. Then, I strayed from the recipe just a bit. Strips of panela cheese were suggested. With a strip of cheese, you could just add one piece to each tortilla before rolling it up with the filling. I opted for an aged goat cheese that I shredded. Corn tortillas were filled with the rajas and mushroom mixture and some shredded cheese, and my tip is to use a toothpick to hold the rolled tortillas closed. Once they were all filled, they were fried, seam side down with the toothpicks removed, until golden and crispy. I topped them with cilantro leaves, sliced jalapeno, and that delicious salsa. 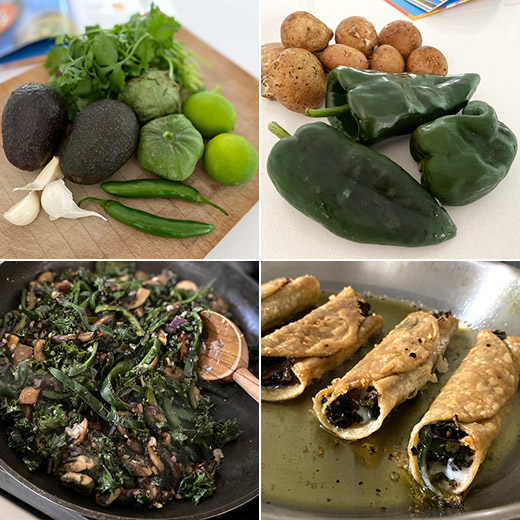 I always love bright, spicy, bold flavors like what’s found throughout this book, and the flautas and salsa were two great examples of them. And, I was right. This book is a lot of fun with its mix of traditional and creative approaches. I need to get back to the kitchen. I have lots more cooking to do. 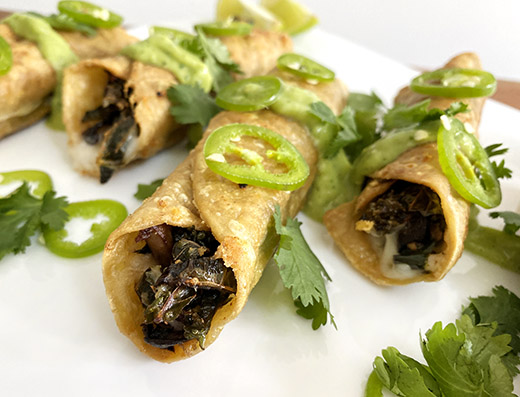