If you’ve ever tried to make enchiladas at home, you know how time-consuming it is to fill and roll each individual enchilada. I’ve taken my mother-in-law’s chicken enchilada recipe and changed up the physical structure of the dish to make it an easy and delicious option to make over the weekend and enjoy throughout the week. Rather than stuffing and rolling each individual enchilada, you’ll create a layered enchiladas bake, similar to a lasagna, only you’ll use corn tortillas rather than lasagna noodles.

First thing, right off the bat, go ahead and boil a pot of water for the chicken. Once the water is boiling, add in two celery stalks, chicken bouillon, and boneless skinless chicken breasts. The celery should still have the leaves attached to the stalk for more flavor. Boil for about 15 minutes then remove the chicken and set aside to cool. While the chicken boils, pour the green enchilada sauce into a saucepot and bring to a simmer. Just have this going on in the background and stir occasionally.

As an FYI, it’s good practice to boil chicken with vegetables like onion, carrot, celery, or fresh herbs. This helps to jazz up the flavor and give you a better-tasting product.

Once the chicken has had a chance to cool a bit, shred with your hands or with a pair of forks. Heat a frying pan with about a tablespoon of olive oil then add the shredded chicken. You’ll fry the chicken for about 5 minutes, then add roughly 2 cups of the enchilada sauce to the pan and cook for an additional 5 minutes.

Cover the baking pan with tin foil and bake for 25 minutes covered. After 25 minutes, remove the tin foil, and bake for an additional 10 minutes to help brown the top layer of cheese. Remove the pan from the oven and let cool for a few minutes.

Tools You May Need

If you like these types of flavors, check out our salsa recipes! 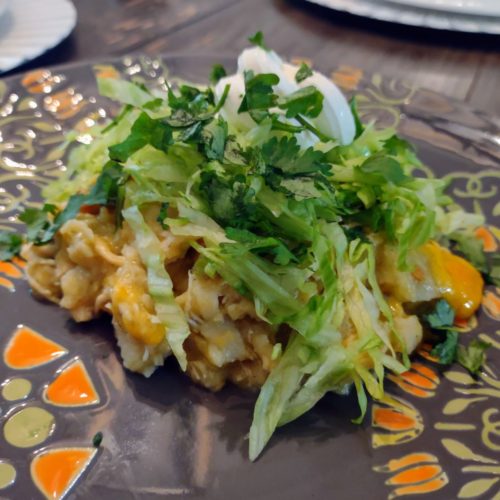 A sort of deconstructed enchilada prepared in layers like a lasagna.