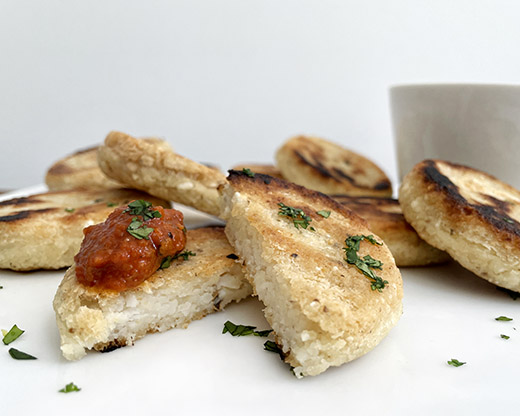 I definitely remember an episode of Parts Unknown involving Bourdain visiting Colombia and eating arepas. I just checked, and that would have been in 2013. So, I’ve been curious about arepas and wondering how to make them at least since then. The new book Colombiana: A Rediscovery of Recipes and Rituals from the Soul of Colombia by Mariana Velasquez, of which I received a review copy, has taught me to make arepas and so much more about Colombian food. Velasquez has worked in restaurant kitchens, tested and developed recipes for food magazines, styled food for photo shoots, and contributed to other cookbooks all while living in the US for more than half of her life. This book brings all those skills together with an opportunity to share the cuisine of her homeland. There are recipes for the morning, menus for lunch or dinner including lots of tempting cocktails, afternoon snacks, favorite everyday dishes of hers that might not be strictly Colombian in origin, and desserts. I noticed the cocktails as soon as I started turning the pages. Aguadiente, called the national liqueur of Colombia, appears in a few of them. The Mistela de Mora is started by infusing aguadiente with blackberries, green peppercorns, and bay leaves. And, the Coquito Mio sounds delicious with coconut liqueur, aged rum, lime juice, and coconut water. Each menu is introduced with a setting of a particular place in Colombia and time of year. Reading about Bogota, at 8,500 feet above sea level, on a cool, fall day made me want to try the dishes even more. That menu includes a potato soup with corn, chicken, and capers and a strawberry meringue with dandelion cream for dessert. The author’s father was of Syrian-Lebanese decent, and Middle Eastern immigrants arrived in the Sinu River Valley of Colombia in the late 1800s and early 1900s. This brought new flavors to the area that are reflected in a menu with stuffed yucca fritters with creme fraiche, olives, hummus, pita bread; yam soup with cheese; and a mango-sesame baked Alaska. There are sweet and savory empanadas, shrimp cocktail, and ice cream sandwiches with molasses cookies and malt ice cream. One snack I couldn’t wait to try was the Alegrias de Coco y Anis. These are popcorn balls held together by date syrup and tahini. They’re usually made with a small type of popcorn, coconut flakes, and anis seeds. I can report they did not last long in my house. But, let’s get back to those arepas.

I loved the idea of making mini arepas or arepitas. The method is the same, they’re just made smaller. I started by placing an order with Rancho Gordo for dried hominy. It was soaked overnight, drained, and cooked until tender. Some cooking liquid was saved, and the hominy was drained. It was placed in a food processor with reserved cooking liquid, butter, and salt and was processed until smooth. Small balls of dough were formed and then flattened into thick rounds before being cooked on each side in a small bit of hot oil in a cast-iron skillet until charred and golden in spots. The tomato jam paired with the arepitas was inspired by a Paula Wolfert recipe from The Food of Morocco. Velasquez styled this dish for that book in Marrakesh where it was photographed. For the jam, canned tomatoes were combined with paprika, garlic, coriander seeds, salt, pepper, and olive oil in the blender and pureed. The mixture was then cooked slowly over low heat until reduced and thickened. 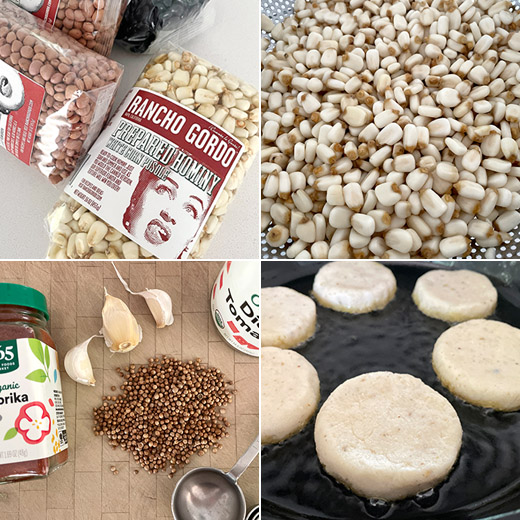 The little arepas were thick enough to stay tender on the inside while the surfaces were crispy, and the tomato jam was a terrific topping. I want to use leftovers stored in the freezer for brunch with eggs. And, I want to have a constant supply of arepas in my freezer. Until I have a chance to go see for myself all the places mentioned throughout the book and taste the dishes where they originated, I can keep learning about Colombia by cooking these recipes. 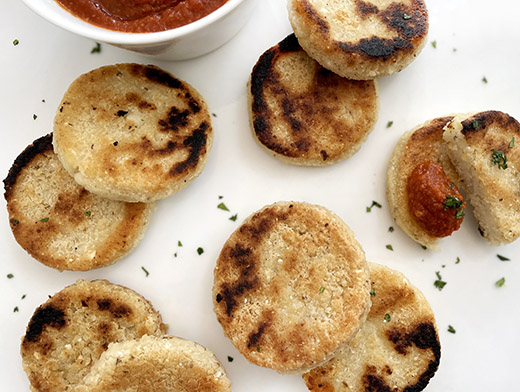